This year a key aspect of popular education is focused on building the leadership of young women community facilitators who will organise their communities towards realising the vision of Social Justice and Food Sovereignty and the praxis of constitutional values. 30 adivasi and dalit women have been selected by their respective community organisations who desire for this philosophy of action to continue amongst the next generations in the districts of Komram Bhim, Medak and Sangareddy in Telangana and erstwhile unified East Godavari, West Godavari, Srikakulam and Chittoor districts of Andhra Pradesh. Between August and November 2022 they all participated in the their first workshop module titled “Me, my Community and my Country’. 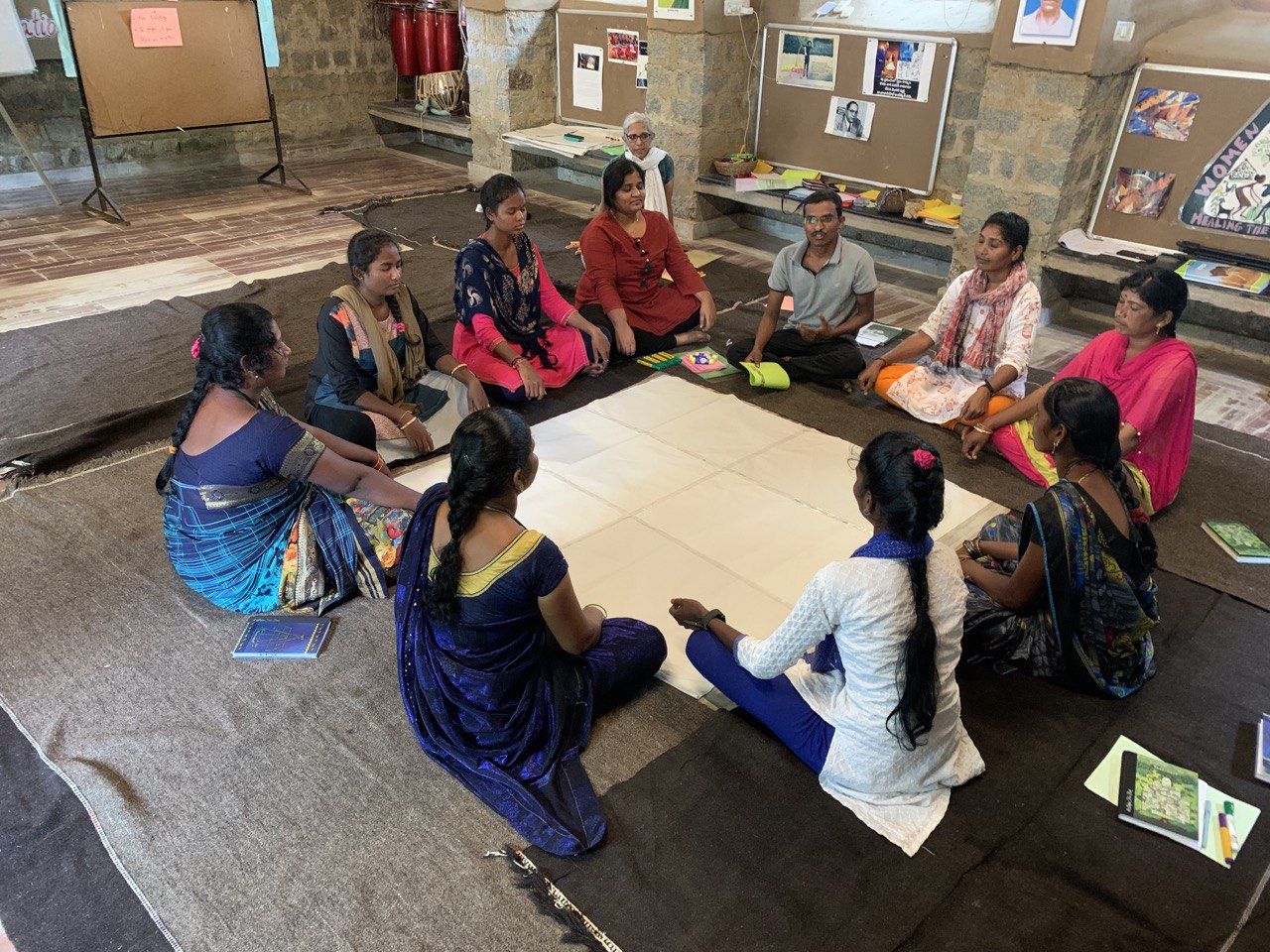 Theater of the Oppressed Workshop

“We all are human. We all are artists. We all are actors. We must all do theatre to find out who we are, and to discover who we could become. Theatre is a form of knowledge: it should and can also be a means of transforming society. Theatre can help us build our future, instead of just waiting for it. “

This form of theater was first founded by Brazilian theater practitioner, Augusto Boal in 1970’s based on Paulo Freire’s Pedagogy of the Oppressed. Yakshi helped facilitate a Theater of the Oppressed workshop in which theatre is used as means of promoting social and political change.

With dalit, bahujan, muslim youth and elderly women from the villages of Sangareddy and Medak district Telangana, Yakshi facilitated a two week workshop to discover the art of looking at one selves. These pictures are glimpses of exercises done to re-harmonise what we feel, listen and see, and that aim to awaken the senses. We will soon be sharing the next steps of image theatre and how this turned into a Play.

Rangu Rangula, a music video released by ‘Modugu Productions’ in June 2022, is the outcome of a music workshop on re-imagining Telangana folk music. Musician and Composer Nirvan Athreya worked with a team of writers, singers, videographers from villages across Sangareddy district to conceptualise and produce an original song and music video. The workshop entailed lyric writing, melodic composition, Music survey (Telangana folk music), Studio recording and video production. The song ‘Rangu Rangula’ gives a unique twist on a love story by addressing the struggles of romance in an inter-caste relationship that is reflective of a large chunk of Telugu society.

The Participatory Filmmaking Workshop for Dalit, Bahujan and Muslim youth began today, on the eve of Babasaheb Ambedkar Jayanti. The workshop aims to train the youth as documentary filmmakers to record and tell their narratives and strengthen their organizing for social justice. The workshop, scheduled to run over a period of 6 weeks, has been conceptualized and is facilitated by Srikrupa Raghunathan, a freelance documentary filmmaker, editor based out of Hyderabad. Krupa R believes in the power of media for social transformation and justice.